Morbid or extreme obesity is expected to double in England from 3% in 2015 to 8% in 2035, getting closer to the most recent statics for morbid (extreme) obesity in the United States – currently the most obese developed country in the world.

The obesity epidemic is not going unnoticed, with researchers, policy makers and civil society debating its alarming implications. These discussions often involve considerations of societal costs. Among the costs of obesity, we find added medical costs (inc.higher expenses on prescription drugs), extra petrol and airline fuel, costs related to lost productivity, etc. However, as the Local Government Association and Public Health England put it in 2013, not much was known about the relationship between obesity and long-term care utilisation. So, as part of the QORU research programme we embarked on a journey to understand the implications of the obesity epidemic in an ageing society with regards to long-term care – both formal (social care) and informal (unpaid care).

Our initial aim was to estimate the effects of obesity on overall long-term care use and then on various types of long-term care separately – ranging from unpaid care provided by relatives or friends to social care provided in people’s homes to residential care. There are several explanations of why obesity may influence long-term care (see the figure below). One obvious explanation is that obese people are more likely to develop serious health conditions, which in turn lead to functional limitations and, thus, increase long-term care needs. Second, obesity may serve as an indicator for a health condition, which is not yet known or diagnosed. Finally, there may be a direct effect of obesity on functional limitations and receipt of care. In our analysis we accounted for existing health conditions, to make sure that we are picking up the latter two effects. Additionally, we controlled for the effects of physical activity (PA) as it does have a relationship with obesity and may bias the results if not accounted for. 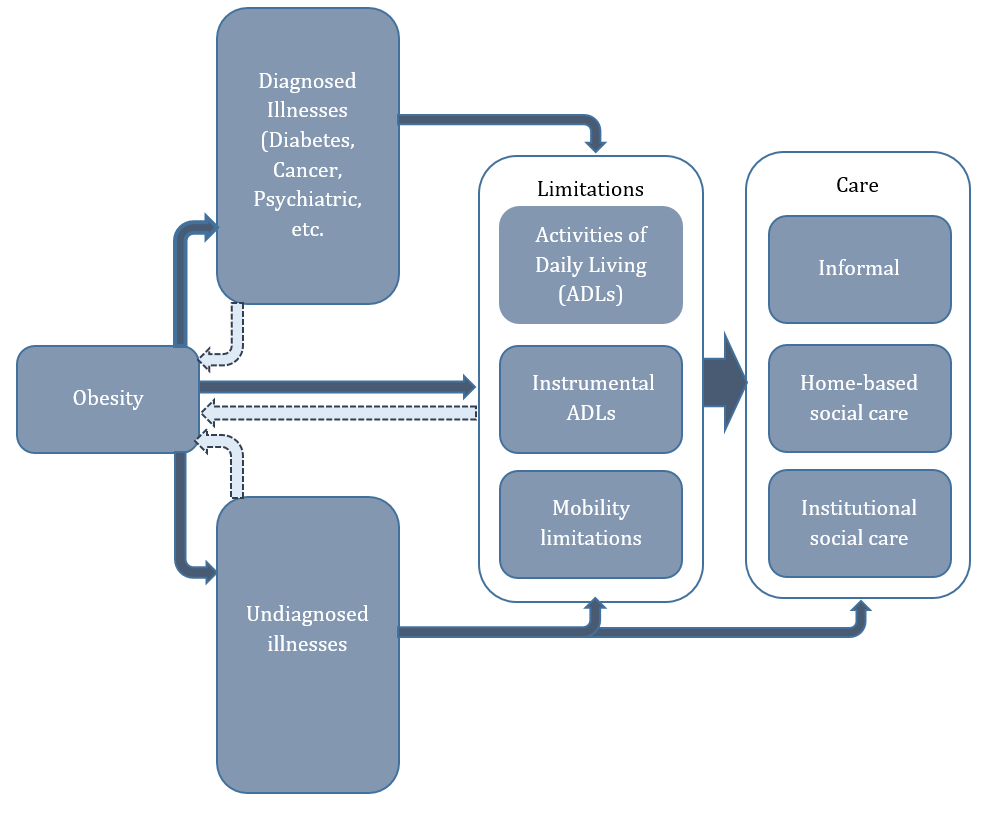 In our analysis we focused on people aged 65 years and over as this population group is most at risk of requiring long-term care and is more likely to be using expensive institutional care. We used the English Longitudinal Study of Ageing (ELSA) to estimate the impact of current obesity status and physical activity on the use of various types of care two years in the future.

Our results show that, compared to people with normal weight, obese people over 65 years old are 25% more likely to use informal care. This effect represents an additional effect of obesity, after controlling for demographic and socio-economic characteristics and a range of health conditions, which might themselves be caused or exacerbated, to some degree, by obesity.

Applying our results to the total value of informal care to society in England (National Audit Office 2014) – £55 billion in 2011 – we find that the overall value of informal care linked to obesity is around £3.9 billion per year. Moreover, the increase in this cost which is purely attributable to the upward trend in obesity is almost £200 million per year. From a theoretical economics perspective, society should invest in efforts tackling the obesity epidemic up to the point when the value of the investment is equal to the value of the benefit such investment would bring – in our case, the savings in terms of provision of informal care. In other words, if the target was to  eliminate obesity among 65+ year olds, investment of up to £3.9 billion per year would have ensured that we have positive return on investment, even if we only count benefits via informal care provision. There is no public information about the amount of resource spent on corresponding interventions targeting older adults from the Public Health budget, but comparing our estimate to the total ring-fenced Public Health Budget (£3.4 billion in 2015-16) provides a compelling case for greater investment in measures addressing obesity epidemic from the societal perspective.

In our second study, we broke obesity down into more categories to capture the effect of higher classes of obesity. This revealed a significant effect of morbid obesity on all types of care, including social care. Having a BMI over 40 is associated with higher use not only of informal care, but of privately purchased and formal care services as Figure 2 shows. The numbers on the bars show how much more likely a person within a certain class of obesity is to use a specific type of care compared to a person with normal weight. For example, 1.95 on the first bar chart means that an older person with BMI more than 40 is 1.95 times more likely to use informal care. As can be seen, being underweight, which is related to the increased frailty towards the end of life, also increases the likelihood of using various types of care. However, this effect is not statistically significant.

Figure 3: Effect of being overweight/obese on use of different types of care (Relative Risk Ratios compared to normal weight).

The likelihood of future use of residential (nursing home) care significantly increases for older people with BMI more than 45 (Figure 3).

Figure 4: Effect of being overweight/obese on use of nursing and residential care (Relative Risk Ratios compared to normal weight).

An estimate of the future long-term care use that is attributed to obesity beyond the currently known indicators of impairment provides useful information for decision-making in both public health  and social care. This allows us to incorporate a wider range of benefits from tackling the obesity epidemic into decision-making, and thus reach more socially optimal levels of investment in corresponding interventions. If obesity serves as a signal for impairment, not yet diagnosed or assessed, accounting for increases of obesity rates would improve planning and budgeting processes and would allow for a better allocation of care system resources in the future.

Katerina Gousia, Olena Nizalova, Gintare Malisauskaite, and Julien Forder. 2019. Heterogeneity in the effect of obesity on future long-term care use in England. Available at https://www.pssru.ac.uk/pub/5816.pdf